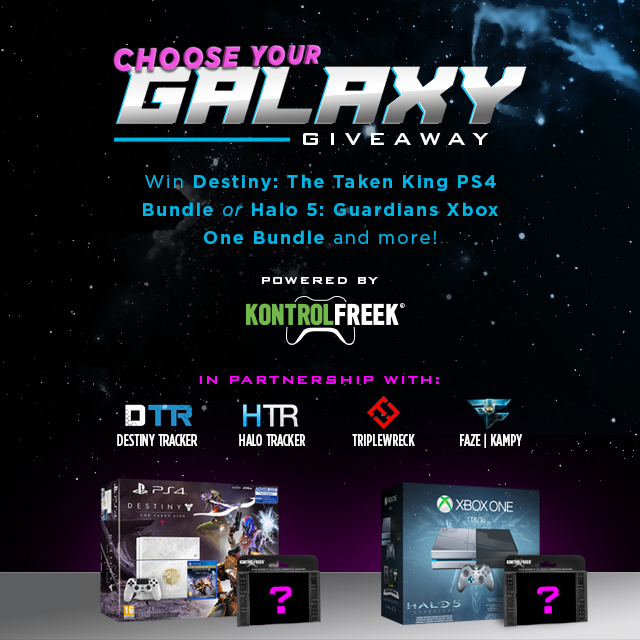 ENTER THE GIVEAWAY HERE
“Choose your Galaxy” and win either a Destiny or Halo Console Bundle!

This month it’s all about exploring the farthest (and always dangerous) reaches of space with a Destiny and Halo giveaway that should get just about every FPS fan excited. We’re giving away a Destiny: The Taken King PlayStation 4 Console Bundle and a Halo 5: Guardians Xbox One Console Bundle to TWO lucky Grand Prize winners. The only question is: which limited edition bundle do you want? Choose wisely, because you can only win one.

Five runners-up will also win their choice of either Destiny: The Taken King game or Halo 5: Guardians game and a Galaxy Prize Pack which features the soon-to-be-released FPS Freek Galaxy.
Winners will be chosen on Tuesday, October 6, 2015!

Runner-Up Prize (5):
Five Runner-Up Prize winners will receive a copy of either Destiny: The Taken King game or Halo 5: Guardians game and a Galaxy Prize Pack*.

P.S. Make sure to click on the red "Claim This Reward" button after completing each action to get credit!