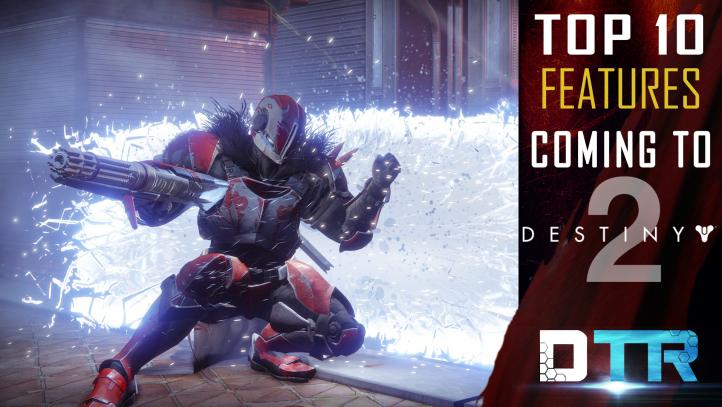 THE TOP 10 FEATURES COMING TO DESTINY 2

It finally happened. Last Thursday we finally got to see a glimpse of our future. In person in LA or stream around the world, us guardians were given the privilege to see ***Destiny 2***.

The highly anticipated sequel to Bungie’s acclaimed franchise is soon upon us. After watching the gameplay reveal stream, the emotional ‘Homecoming’ mission, the new PVP mode ‘Countdown’, ‘The Inverted Spire’ strike and countless other videos of gameplay footage… I’m ready.

With this in mind, these 10 features could prove worth updating your Destiny journey in just over 100 days...

Yes, you are reading this correctly! Destiny 2 will have an actual story for us to get engrossed in and become emotional about. Without question the most exciting feature, the story campaign (“The Red War”) is what Bungie is calling it’s “cinematic experience”. Why are we so excited and pumped about D2’s story? Because D1’s was pretty much non-existent (besides The Taken King in my opinion).

Out of place, out of sync, not diving into the game’s amazing lore… they were many faults. The main issue was that it just didn’t deliver and it hurt the reputation of the franchise as we know Bungie has the experience and skill to create story masterpieces (Halo: Reach for example).

With a promised bigger campaign, more missions/encounters and more cinematics, Destiny 2 looks to be promising us a real narrative. Starting off with “Homecoming’, being attacked by the Red Legion and the Traveller being taken as hostage by the imposing Ghaul, we start all over again. No gear, no light, we’ve simply lost everything.

For me, this is Destiny’s Empire Strikes Back. Almost literally.

With a new Destiny experience comes new subclasses, and boy they look amazing. Bungie revealed one new subclass for each of those guardians - the Sentinel Titan, the Dawnblade Warlock and the Arcstrider Hunter. The Sentinel is geared toward defense and close-quarters combat, the Dawnblade is designed for aerial destruction and the Arcstrider is focused on acrobatic moves. In other words, we are getting Captain America, an aerial Spartan and an acrobatic ninja. WHICH SOUNDS COOL.

The three new subclasses are replacing some existing ones though, with us saying goodbye to the Defender Titan, the Sunsinger Warlock and the Bladedancer Hunter. However, fret not as Bungie is making up for this by including some of the defining powers of those subclasses as non-super “class abilities”. The Defender’s god-like bubble shield is gone, but it can put up forward-facing shields. Sunsingers can’t resurrect themselves anymore, but now becomes an ability to heal fellow teammates. With these no longer being supers, you’ll be able to use them much more frequently.

We might have lost some fan favorites, but we’re getting new amazing super/abilities so that fills me with confidence. Here’s hoping to the new subclasses being amazing and overall all 3 classes becoming more balanced and equally as fun to play as. Just please leave my Titan alone.

Out goes to the rigid setup of Primary, Special and Heavy we have been used over the last 3 years. Now weapons will be split up based on the type and level of damage they actually do - with the three weapon slots being Kinetic, Energy and Power. What does this mean? We effectively now carry 2 primary guns at the same time, with special weapons such as sniper rifles and shotguns for example now becoming power weapons, our new ‘heavies’.

Another difference between those groups is that kinetic weapons can’t do elemental damage, with that being limited to the energy slot.

It might take time getting used to the changes in our weapon setups, but Bungie said it’s goal was to give players more freedom in setting up their weapon loadouts. Hopefully that will be the case come September.

The reveal also showed off a number of interesting bits of gear. Some highlights being a minigun, submachine guns, new style of swords, new exotics and grenade launchers.

In terms of actual gear and armour pieces, nothing has been revealed from Bungie besides what we’ve actually seen in footage and screenshots. Hopefully E3 will tell us more.

The planets of Destiny (Moon, Venus, Mars, The Dreadnaught on Saturn and The Plaguelands on Earth) have been retired in favour of a new solar system map. Available to visit now will be Jupiter’s moon IO, Saturn's largest moon Titan, and the sulphuric vex machine world of Nessus. We’ll also be heading back to Earth, but the Cosmodrome has been replaced by the EDZ, an European locale that’s twice as large as anything in Destiny to date.

With the Tower being destroyed, guardians need somewhere else to call home and that place is ‘The Farm’, our new social space which is lead by Hawthorne, a new major NPC in the franchise.

There has also been a clear attempt by Bungie and their art/design teams to make these worlds very different to what we’ve seen before, with Titan for example being a world entirely covered by water, meaning we’ll be exploring oil rig-like structures.

Whilst exploring these planets, we now have far more things to do. Out goes the current tired structure patrol and is now replaced with a more engaging journey of exploration and side-quests. No more scanning a box and killing 10 enemies, in comes 3 new (we know of so far) challenging modes to PVE patrolling.

+ Heroic objectives whilst not gone into huge detail, these are going to be an updated version of the current public event, with more epic encounters/boss battles to be combated by multiple guardians it seems.
+ Treasure Maps - pretty self explanatory, hunt down enemies/objects to get rare and sought after loot.
+ Then there’s Lost Sectors, which appear to be the biggest new activity. NPC quest givers will be able to mark unknown areas on your map, which can then be explored like RPG dungeons. Inside each is a hoard of treasure defended by a boss, which when defeated will unlock the special loot.

Something also coming to D2 that has been long, LONG sought after by the players is an actual map. Yes, AN ACTUAL MAP! Trust me, the small changes to Destiny 2 will turn out to be the most significant.

Plus… no more orbit. Yes, no more sitting around for an eternity waiting for others anymore. THANK YOU BUNGIE.

PVP and it’s Crucible is being majorly revamped, which will now feature 4v4 gameplay across all modes. The HUD will give new information like whether your opponents have their super available or if they’re carrying power ammo, allowing for more strategic gameplay. Additionally, there’s a new Countdown game type with an attack / defend structure being added to the Crucible.

By watching some PVP footage as well, PVP looks slower and not as fast paced, with the TTK (‘Time To Kill’) being longer as well. Also, abilities will not be as powerful and dominant as they were in Destiny 1. An example of that being sticky grenades no longer being to instantly kill guardians.

These changes will hopefully make the PVP side of Destiny 2 a more enjoyable experience as a whole and signal an end to the dreaded ‘meta’.

From a visual and audio perspective, Destiny 2 looks stunning.

- New and improved UI with crisp and clear text/layout.
- The new styling for the Director
- A new radar with a shorter radius on where enemies are.
- (Mentioned before) The new map.
- More dialogue with major NPC’s.
- Audio cues for a more immersive expereince.

I could go on and on and on about the visuals and audio enhancements added to Destiny 2. They simply are are amazing. To me arguarbly the biggest change to the franchise even.

Now that community is going to grow even larger with the inclusion of PC. D2 on PC will offer an immersive, visual experience like no other. Being held back by legacy consoles, Destiny was limited to it’s true potential on PS4 and Xbox One and such suffered for it. Now with PS3 and Xbox 360 long gone, Bungie can maximise Destiny on all fronts now.

The PC version will tie into Blizzard’s Battle.net online network instead of using Steam. Bungie will also not lock the frame rate of Destiny 2 for PC. Hardware limitations on the Xbox One and PS4 don't make this possible for console players. But PC gamers will get to experience the game in 4K, but only if they have a powerful graphics processor and a 4K display. Plus of course there will also be full mouse/keyboard support, text chat, an adjustable field of view and 21:9 monitor support.

With the PC version being described as the “pinnacle experience” to play Destiny 2, it seems like now is the time to start investing in a keyboard and mouse to be treated to an amazing journey on the newest format to join the Destiny community.

While not new to Destiny, Clans are now built into the game itself, making it easier to manage, grow and customise. Being part of a clan will give you shared rewards, even if you only play a few specific missions or matches per week, everyone will benefit in some way.

For those who want to play solo, then Guided Games combines the two concepts. Clans can advertise for additional players to join a Fireteam - completing a team of three or six that wouldn't usually allow matchmaking, such as the Nightfall or Raid - with solo players able to select their desired group based their specific requests.

The solo players can then freely move on after the game, or if they enjoyed their time with the clan, decide to join up. In my opinion, Guided Games is a huge addition to the franchise. The potential game changer right here for all the solo players in the Destiny universe.

THE ‘SURPRISES’ WE STILL DON’T KNOW

And this is where we can continue to dream, brainstorm with one another and try to put the missing pieces together to the eagerly awaited sequel. So, what could they be?

- New enemies to feature along with the existing foes already expected?
- New PVE/PVP modes replacing Iron Banner, Challenge of Elders and Trials of Osiris
- Will Xur decide to work a full week instead of part-time now?
- Exotic weapons are continuing to be part of our gaming experience, but how many will return? Will we be fetching a Gjallarhorn for a third time?
- PC exclusive features such as skins, outfits, etc?

The possibilities are endless right now it feels.

Did I already mention no more returning to orbit…? ;)

Us guardians are ready. Ready for the new worlds, the new weapons to cherish, the new memories to create and to stop Ghaul from ending humanity. Simply put, Destiny 2 cannot come quick enough. (Needs a time machine, bad.)

Destiny 2 releases worldwide on 8th September for PlayStation 4 and Xbox One and on PC shortly after.