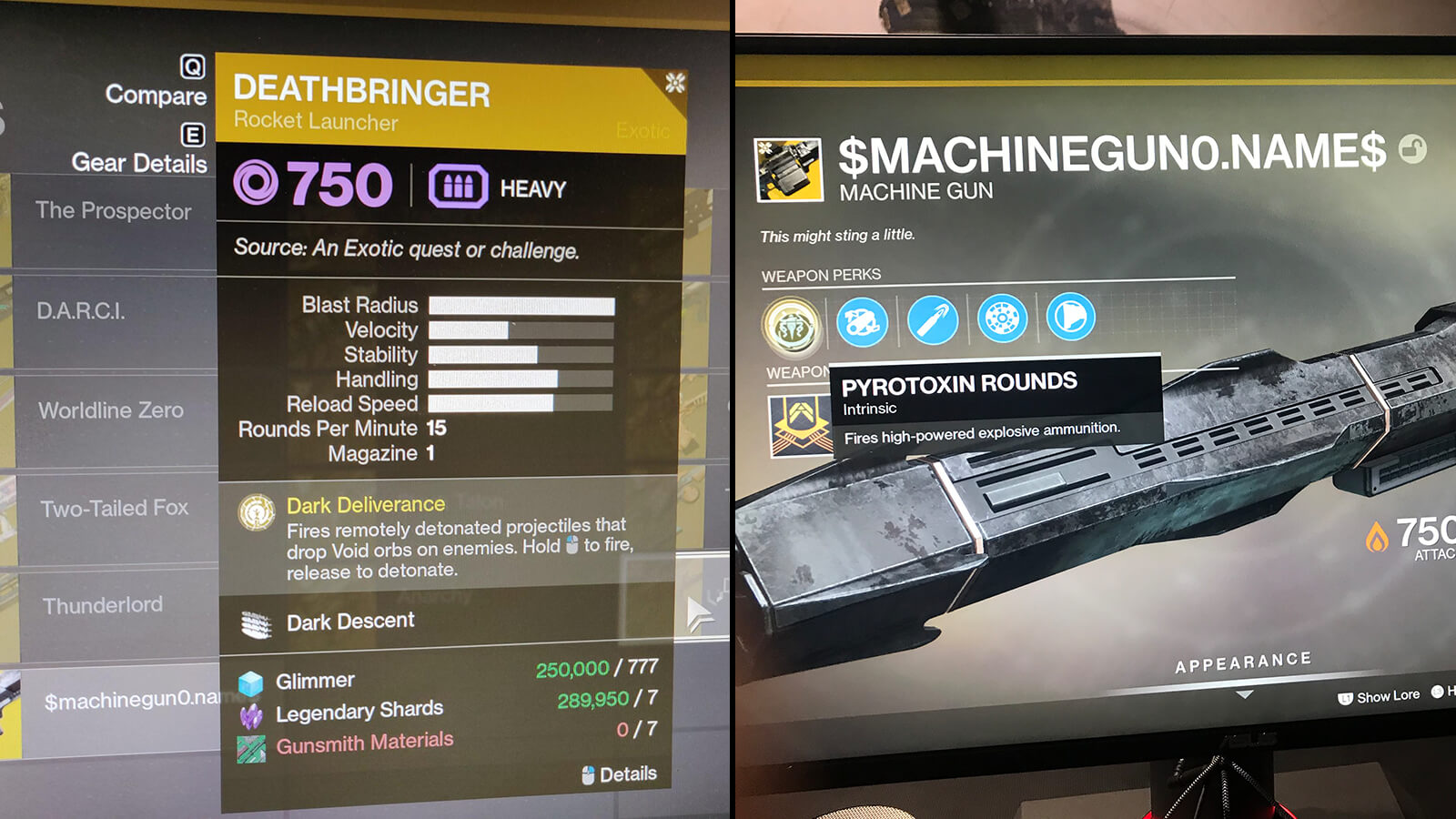 New exotic weapons and equipment dropping in Shadowkeep have been leaked after Guardians had the chance to test out the new content at Bungie's PAX West booth.

The first exotic revealed was a Void Rocket Launcher titled ‘Deathbringer’. The powerful new weapon boasts a major punch, especially once dialled up in strength with a maxed-out Blast Radius stat. The downside of the weapon, however, is it has only one rocket in the magazine.

Deathbringer’s intrinsic perk reads “Fires remotely detonated projectiles that drop Void orbs on enemies. Hold [right mouse button] to fire, release to detonate”. This perk is sure to drastically add to the weapon's damage as these Void orbs seem to have some amount of enemy tracking to them as shown in the Bungie ViDoc “Out of the Shadows”.

For those familiar with Destiny 1 exotics, the Deathbringer also appears to be similar to a lovechild between Dragon's Breath and the Gjallarhorn, mainly due to the remotely detonated rounds from the Dragon's Breath, and the extra cluster rounds from the fan-favourite Gjallarhorn. The Deathbringer will also have an exotic trait titled 'Dark Descent'.

Another exotic weapon revealed at the PAX West testing arena was a machine gun with the placeholder name '$MACHINEGUN0.NAME'. This new solar weapon appears to be the first of a new archetype, with extreme range but a low RPM of 120.

There were also some Guardians ready to share their views on the new weapons from PAX, with Reddit user VON_TAR describing the '$MACHINEGUN0(dot)NAME' like a linear fusion rifle.

"It fires like an instant linear fusion and has no drop-off. 150 to the body, 1 shot headshots. It is semi-automatic, has 3 in the mag (max 13) and is extremely satisfying to use," they said.

Divinity has comparable base stats to the three current trace rifles, except in regards to stability and magazine size. Divinity boasts a max stability stat, making it super easy to keep the beam on target, and a magazine size of 194, more than double most other trace rifles.

The Intrinsic perk for Divinity is named 'Judgement', and it was revealed through the leaks that it reads: "Sustained damage with this weapon envelops the target in a field that weakens and disrupts them." Like the Deathbringer, Divinity was also shown in the Out of the Shadows vidoc.

The Exotic trait of Divinity is known as Penance and reads “Targets under the effects of Judgement long enough are struck with a burst of damage.” As the purpose of Divinity is to create a large crit spot for your fireteam to take advantage of it seems this weapon will be more of a support weapon and will mainly be used for the damage phases of endgame bosses.