With the new Season of the Undying, Bungie launched some new changes to how the Eververse store and how players would go about earning Bright Dust, the free currency used to purchase Eververse items. Sadly, these changes have left a sour taste in the mouths of a large portion of the community as they feel their time and money invested into the franchise is not being respected by Bungie.

Previously, players would earn an Eververse engram with each level up and then dismantle any unwanted items for a small amount of Bright Dust. Players could then use this Bright Dust to purchase any available items from the Eververse store that were in the weekly Bright Dust rotation.

Even though the amount of Bright Dust gained per item was quite small, an Eververse engram every level ensured a steady supply of Bright Dust.  This allowed many of the more hardcore players to accrue an amount of Bright Dust in the 10’s of thousands. This made certain that those members of the community that were constantly playing, and always buying the new expansions, were rewarded with being able to buy any cosmetics they wanted from the Eververse store.

Bungie has made some major changes to the Eververse store that had left many players within the community feeling dejected. Instead of an Eververse engram being obtained on every level up, they are now instead earned on every 5 level-ups but on top of this, the items cannot be dismantled for Bright Dust.

Instead of earning Bright Dust through dismantling Eververse items, players can now earn the currency through completing Vanguard, Crucible, and Gambit weekly bounties. If a player completes all of these bounties on all 3 available characters they would earn a total of 3600 Bright Dust which is just enough to buy a single Ghost Shell, Ship or Sparrow.

Now, admittedly, this change isn't all that bad as players who put in the time would still be able to save themselves up a decent stash of Bright Dust but its the following move by Bungie that really angered players.

Following the release of Season of the Undying, it was determined by players using data mining methods which items from the Eververse store would not enter the weekly Bright Dust rotation. Instead, these items could only be able to purchase with Silver.

The following image was tweeted out by ‘@JpDeathBlade: 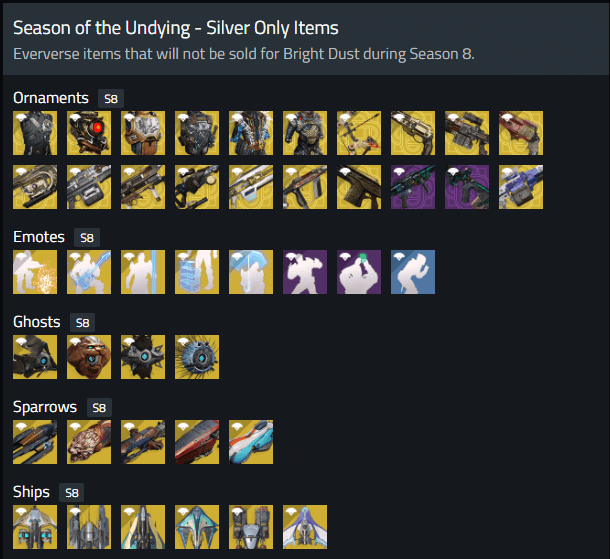 As you can see, essentially all of the more highly sought after exotic ornaments can only be purchased using Silver. Most of these ornaments cost 700 Silver but this then brings about another point. Silver only sells in bundles of 500, 1000, 2000, 3000 and 5000. This means that if you only wanted a single exotic ornament you would need to fork out $10USD to purchase it while the 300 Silver leftover just sits there unused.

This outrage came to a head recently with a Reddit user by the name of ‘Short_circuit21’ who posted a thread with the following title:

“As a day 1 player, I have spent about 160 bucks for this game and almost all its DLC. Having to pay upwards of 10 bucks for the coolest cosmetic items (which I can't earn through gameplay) doesn't give me the feeling that my money was well spent.”

Many of the comments echoed the poster’s feelings towards Eververse.

"I think another issue is the proximity to the launch of Shadowkeep and the Annual Pass... it might be easier for me to swallow paying $5-10 for cosmetics if it were Spring/Summer 2020 and I’ve had about six months of cosmetics that were earnable," fellow Guardian 'iamthedaymn21' said in response.

"I’d feel I at least got my money’s worth. But they literally had the store chock full of cosmetics I can’t earn the same week I paid for the game and annual pass. The idea that I would need to drop another $10 that same week if the store had some item I really liked, leaves a real sour taste in my mouth."

“Leaves a more sour taste when they tell us that they don’t have time and resources to make nightfall exclusive loot or activity exclusive loot but they can make 300 dollars worth of Eververse items every three months but can’t even put a ghost shell in the raid I paid for?” added ‘ItsAmerico’.

Bungie has remained suspiciously quiet when it comes to these Eververse changes and the outrage that it has sparked within the community. Their silence could be a good indication of their stance on the matter so it seems it would be unlikely that we see changes to the Eververse economy any time soon.

You need to be signed in to comment.
Archang3ll 4 months ago

I'm brand new to D2 (Been plaing since the SK launch) and that is insane. I love the game but wow.