Where is Xur and what is he selling? Destiny 2's Exotic Location, Weapon, Armor: February 5

Where is Xur in Destiny 2 today? The exotic and mysterious gear merchant, otherwise known as the Agent of the Nine, is ready to sell you some new exotic weapons and armor in exchange for your legendary shards.

Xur can be found in the Hangar of the Tower. Head left after entering the large open space of the Hangar until you pass the old Dead Orbit vendor location. Past this is a small staircase leading on to a low catwalk. 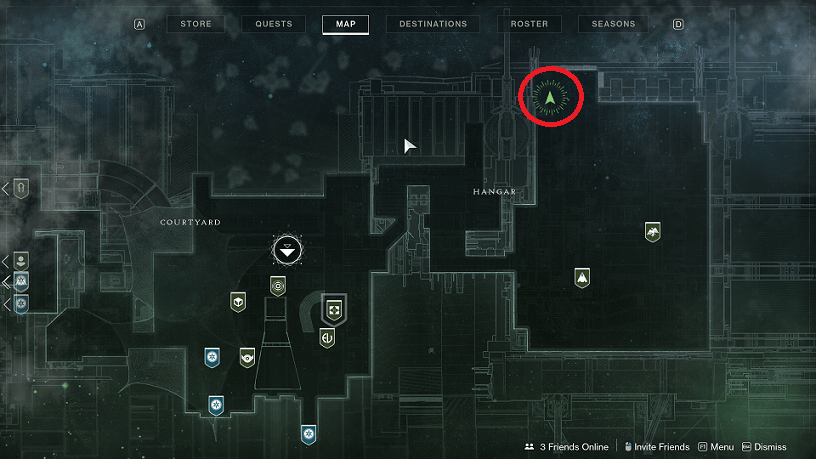 This week Xur is selling the following: 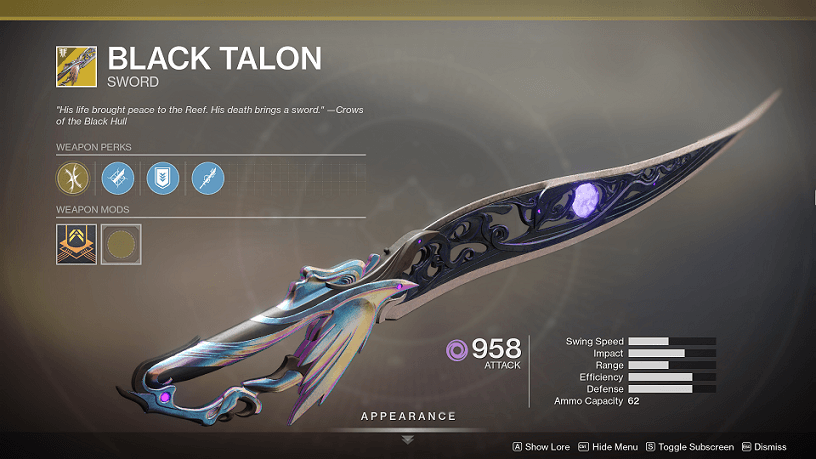 Black Talon is an Exotic Sword that deals Void damage.

This ranged attack is an amazing ability for a Sword as it directly compensates for the obvious shortcoming of using Swords, the extremely short engage range.

This ability can be used to quickly dispatch enemies at a decent distance without putting the wielder in danger like the traditional use of Swords can do.

The projectile itself also does a small amount of ‘area of effect’ damage so it can take out small groups of clumped enemies. The damage is enough to take out most Minor enemies in a single blast but don’t expect to do the same to Major and Boss enemies although it can still take away a good chunk of health.

The special attack does take up 4 Heavy Ammo each time though so be sure not to spam the ability too much or you will soon find yourself with a blunt Sword. Other than this ability the Sword itself is fairly average with it having stats similar to other Legendary Swords.

Black Talon also has an Exotic Catalyst that can be found as a random reward when completing Strikes, Crucible matches or Gambit matches. To complete the Catalyst, the player must kill at least 500 enemies with Black Talon.

Once the Catalyst is completed, Black Talon will now generate Orbs of Light on multikills and gain an extra perk. This extra perk allows the Crow’s Wings ability to receive a damage buff if it is used immediately after blocking damage with Black Talon. Black Talon is a great Exotic that is extremely fun, and definitely worth picking up. 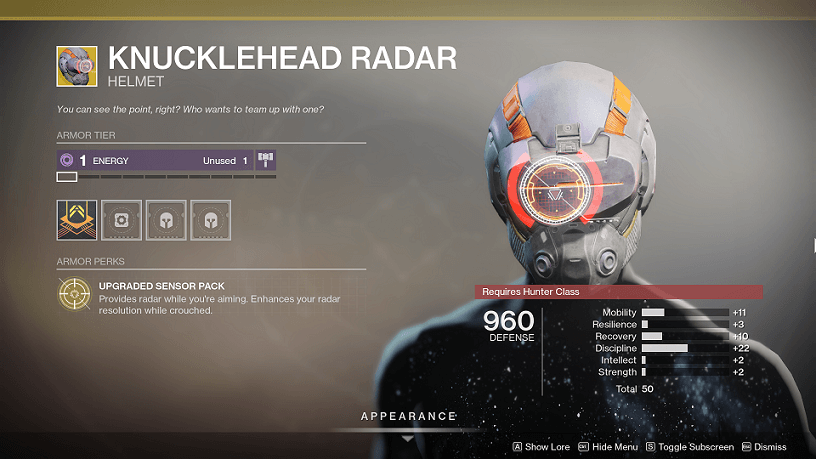 Knucklehead Radar is an Exotic Helmet for the Hunter class.

At first glance this Exotic seems fairly lacklustre but this is not the case. The perk itself may seem quite uninteresting but it is extremely powerful when in capable hands. Knucklehead Radar keeps your radar active while aiming down sights instead of it disappearing like it normally does without the perk.

This perk massively increases the situational awareness of the player as they are able to ‘see’ all around them while ADSing and on the lookout for enemies, making it much harder to be flanked. While crouched, the perk also doubles the amount of sectors on the radar that can detect enemies making it easier to pinpoint their location.

Simply put, this Exotic may not be the flashiest but it will definitely improve your play in the Crucible when wearing it. It also has the added benefit of the ability to be used with any Subclass.

Knucklehead Radar is a fantastic Exotic for activities like the Crucible as it’s very easy to use and comes with immediate benefits to your level of play. It may not have the most direct form power but depending on your skill level, there is no limit to what this Exotic can do. 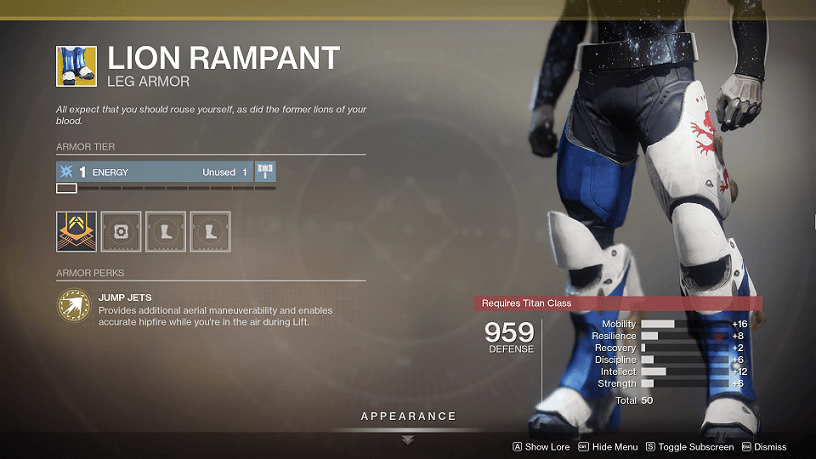 Lion Rampant is a set of Leg Armor for the Titan class.

Lion Rampant doubles the duration of all Lift abilities as well as giving the player increased aerial control, meaning they can turn more sharply while in the air. The extra in air accuracy is definitely helpful but it shouldn't make a massive difference to how you play.

Exotics that enhance the player’s movement are hard to rate in power level as it is very dependent on the player’s playstyle. It basically comes down to whether the player enjoys the extra freedom Lion Rampant gives even though it doesn't give a direct power increase.

If you have yet to pick these up then, by all means, purchase them and give them a go,  you might find the extra speed and maneuverability game-changing. For most people though, Lion Rampant isn't worth the Exotic slot. 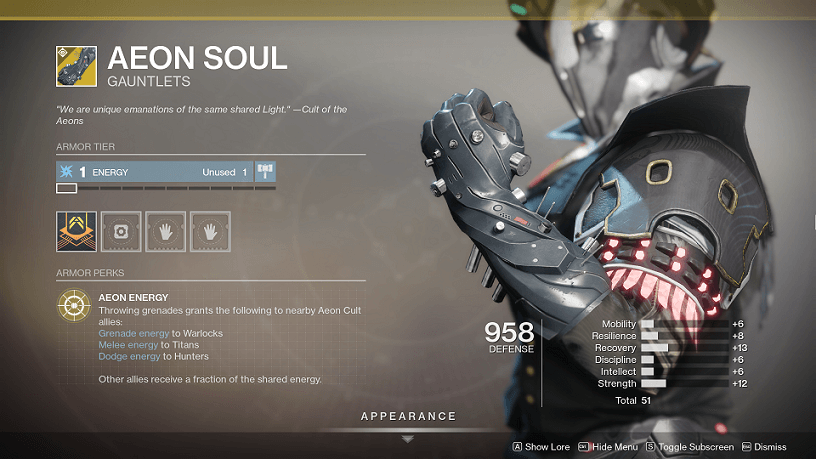 Aeon Soul is a set of Exotic Gauntlets for the Warlock class.

It should be said straight out of the gate that this Exotic, as well as the Titan and Hunter equivalent pieces, are terrible Exotics and no amount of Legendary Shards should be parted with to purchase them.

With the introduction of Armor 2.0, mods such as Bomber, Outreach, Perpetuation, Dynamo, and Distribution became much easier to acquire and use. This severely impacts the need for the Aeon Exotics as these mods give a more direct and efficient approach for gaining ability energy.

Even other Warlock Exotics such Nezerac’s Sin and Crown of Tempests are a much better choice as they grant more ways to earn ability energy at a much faster rate.